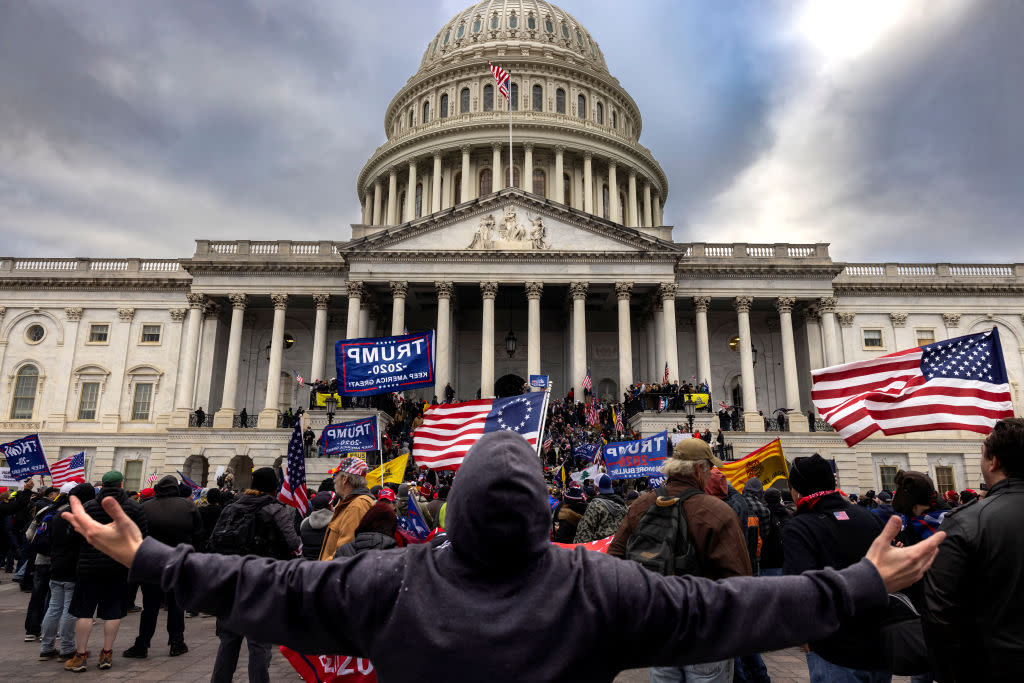 Pro-Trump protesters gather in front of the U.S. Capitol Building on January 6, 2021 in Washington, DC. Trump supporters gathered in the nation’s capital to protest the ratification of President-elect Joe Biden’s Electoral College victory over President Trump in the 2020 election. A pro-Trump mob later stormed the Capitol, breaking windows and clashing with police officers. Five people died as a result. Credit – Photo by Brent Stirton/Getty Images

In my small Pentecostal church, we all expected the guillotine to be set up in the parking lot, probably by the One World Government. It was Arkansas in the early 1980s, and to our youth group, certain truths were known because they had been repeated by friends and adults, long before Twitter or Gab.

You should shun Procter & Gamble products because there was a hidden 666, the mark of the beast, inside the company logo. If you played certain rock songs backwards, you would hear entreaties to smoke marijuana. A movie screened in the church sanctuary, “A Distant Thunder,” showed what would happen when the United Nations was given free rein during the coming Tribulation, as forecast in the Book of Revelation. The global government would lop off the heads of those who honored Jesus and refused to bow to state tyranny. Better to be ready for the Rapture.

On Jan. 6, when I saw crosses, “Jesus Saves” signs, and the Christian flag among the crowds storming the U.S. Capitol, my stomach seized. It was a reminder that I, too, once thought of myself as a foot soldier in a divine cause.

The story we told ourselves was all bravery and justice. A devil-serving elite was arrayed against us, so we geared up for battle against “the world,” the term for everyone else. The boys would go to the woods to shoot guns, dressed in the khaki uniforms of our church’s alternative to the too-secular Boy Scouts. The girls did macramé. We knew a few Italian Catholics, had heard of Jews (misguided, we believed, but mysteriously favored by God), and might have spoken once or twice to a Black person from a neighboring town. But we assumed that when Christ returned and set up his kingdom, people like us—white and righteous—would be first in line at his heavenly palace.

Despite important statements by some evangelical leaders in the weeks since Jan. 6, versions of these ideas still swirl around pulpits and Sunday school classrooms every week. For the United States to reckon fully with Donald Trump and his legacy, white evangelical leaders and their communities must lead a deep process of inward-looking discernment. It is beyond time for a new Reformation inside evangelical Christianity, one that will reject the holy war against liberals, journalists, scientists, non-believers, and other actual human beings. Without it, this form of faith, despite its glories and intimate truths, will remain the official ideology of America’s white tribalism.

There is, of course, no such thing as “an evangelical.” American Christians who might describe themselves with that label share a broad set of commitments and experiences, among them a personal story of salvation, belief in the authority of scripture, and a charge to propagate the good news of Jesus Christ. The differences, however, are stark, even from congregation to congregation. Some, such as the Southern Baptist Convention, the largest Protestant denomination, have long courted political power. Others, such as the Assemblies of God, the largest Pentecostal group—with its openness to ecstatic worship and present-day miracles—have tended to avoid it. Unaffiliated, interdenominational, and multisite churches, such as the international Hillsong franchise or Joel Osteen’s Lakewood Church in Houston, Texas, add further complexity to the American evangelical landscape.

However, some of the most committed supporters of Trump share a worldview that might be described as radical Christianism, an outlook on politics and culture that has remained largely unchanged for decades. It traffics in conspiracy and encourages distrusting one’s own eyes and ears. It substitutes idiosyncratic interpretations of ancient texts for questioning engagement guided by real experts in languages and history. It is beholden to charismatic leaders who combine consumerism, celebrity culture, and stadium-level entertainment, a mix pioneered by Aimee Semple McPherson in the 1930s and exploited by Jimmy Swaggart and others in the 1980s.

Its leaders have long been early-adopters of new technology to build their fan base, from radio to television and beyond. They have stoked a conspicuous identity politics that in recent years has fueled a boom in self-affirming consumption. Retail stores such as Altar’d States and Hobby Lobby, whose owners financed the grand Museum of the Bible in Washington, DC, offer faith-based fashion and home décor. The blockbuster Left Behind books and films brought the end times to a mass audience in the 2000s. They primed the market for a new mainstream genre, Christian movies, that includes Miracles from Heaven with Jennifer Garner and The Trump Prophecy, the story of an Orlando firefighter’s vision that Donald Trump would become president if, incongruously, enough Christians blew a shofar.

In all these ways, the most zealous followers of Trump and his successors are less like the supporters of an autocrat and more like the adherents of televangelists such as Jim and Tammy Faye Bakker. At the height of their PTL Club in the 1980s, the Bakkers solicited money from the rural poor, courted middle-class suburbanites, and even built a theme park before splitting up—Jim to become a convicted felon and hawker of fake coronavirus cures, Tammy Faye to become a gay icon. In fact, it would not be surprising if Trump’s next move were to start a church. His base and the Bakkers’—older Americans susceptible to cultish hucksters and QAnon—are dispiritingly similar.

Today, Christian leaders who once took Islam to task for its alleged role in fomenting terrorism among a small group of extremists should now look in the mirror. When religion fuses with grievance and existential struggle, it can be a powerful motivator for action. When it gets a whiff of power, from fundamentalist Hinduism in India to violent Buddhism in Myanmar, the results are more dangerous still. Without hard work right now, evangelical Christianity will cement its place as the church of narrow American nativism.

There are pathways to healing. Church leaders can organize de-radicalization programs modeled on those used successfully by some mosques. They can break the God-and-guns nexus that twists legitimate sporting equipment into a holy relic. Internet literacy classes and addiction recovery groups can help older Christians use online information and social media responsibly. Ministers can speak openly about conspiracy theories and the sin of white nationalism. Preaching along these lines isn’t “being political.” It is speaking directly to the burdens and temptations that are harming the people sitting in the pews.

To help pull themselves out of the quicksand of tribal Christianity, white evangelicals also have a powerful tool right in their midst: their own teenagers. According to a survey by the Pew Research Center, evangelical youth mirror their parents in some ways. They are more likely than other Christian teens to say that religion is very important in their lives, for example, and two-thirds report believing that only one religion is true. But a generational gap is already apparent. According to other research, compared to their elders, evangelical youth are more world-aware, more likely to have friends from different racial or ethnic backgrounds, and more comfortable with cultural difference. They are already more at home in the America of the near future, one where white people can no longer assume demographic dominance or easily insist that the United States is a “Christian nation.” Young people have a pent-up talent for loving acceptance, unless they are scared out of it by the adults in charge.

“Don’t let the liberal professors change you,” a church leader told me when I went off to college, the first in my family to leave the farm in the Ozarks. They did, and I even became one. Yet I still think of myself as a Pentecostal, in spite of it all. As with secular Jews and cultural Muslims, Christians who were born into being born-again can find in their own tradition things that go beyond strict doctrine and orthodox belief. To me, this particular form of religion is like a native language, the comfortable grammar of my encounters with ultimate things.

Interpreted with openness and self-awareness, the many types of evangelical Christianity can be heart-stoppingly profound—mysterious and assured, grounded and soaring, practiced in the diagnostics of human pain. To remake the church, white evangelical leaders just need to do the one thing I wish more of my mentors had managed: to stop teaching their young people how not to love.